STOP PRESS!!!! YES! We are open as usual. Click for updates here!

Is It Hot In Here?

Hot flushes, night sweats, clamminess – for most women, those five to seven years can be a killer. But is there a cool answer?

Jeannie woke up several times a night radiating heat and perspiring. Throwing the bed clothes off and having to change her top had become the norm, even in the middle of winter to the bemusement of her not-too-sympathetic husband, Clifford. Her sleep was thrown off and she felt tired and out of sync during the day. But she was wary of possible risks using estrogen and progesterone and had tried a bunch of other remedies, instead. Nothing really helped. She still suffered the sauna-like symptoms 7 or 8 times a day.

Vasomotor symptoms are no laughing matter, as Jeannie was to explain to her husband one particular evening when she’d had quite enough. And then she read an article that changed everything.

The sudden rushes of heat and sweating are often accompanied by increased heart rate, chills, shivering, clamminess, anxiety, feelings of nausea, a “head-ache”-like sensation, visible reddening and blotching of the face and neck, an increase in core body temperature, increased metabolism, and interrupted sleep. Women are in the prime of their lives, often juggling families and work, and sleep is precious. So just what was that article about?

It was about a study carried out by researchers, on women just like her, at the University of Texas and Baylor University, in the U.S, and was published in the journal, Menopause, in 2013*

The women attended hypnosis sessions once a week for 5 weeks whilst another group (the control group), saw a doctor and discussed menopause during the same time. 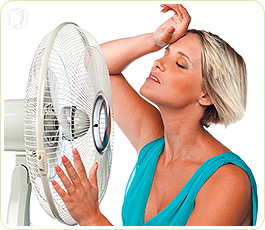 Even more startling to the scientists was the recording by the skin monitors that showed a drop of 57% skin temperature in those that participated in the clinical hypnosis.

The researchers speculated that the results may be due to the fact hypnosis can boost the function of the parasympathetic nerve system, which plays a part in hot flushes.
And what about Jeannie? Enough was enough! She was on the internet the next day and booking herself in for four sessions.

If you’re ready to cool off and take that next step now, your first appointment with a FREE first 20 minutes at our Sutherland Shire clinics to decide if Strategic Hypnotherapy is right for you is only a click away.