Clinical hypnosis for IBS, a sometimes quite painful and embarrasing condition,  is now available.   And for those suffering like Maggie was, what a relief!

After cancelling nights out with her girlfriends, missing appointments with her clients and no longer playing tennis, Maggie found herself losing confidence & missing out on a lot of life.  And when she did leave the house, sometimes after four trips to the bathroom, the first thing she did where ever she went was to case the joint for the Ladies Room.  IBS was not only tying up her gastrointestinal tract, but her happiness as well.

Irritable Bowel Syndrome, condition of the digestive system whose symptoms include cramps, diarrhea, constipation and bloating, afflicts 10-15% of the Australian population at some point in their life, making it the second most common cause of workplace absenteeism, according to Professor Peter Gibson, Gastroenterologist and a world recognised expert on the condition .

IBS is not the kind of condition you’re likely to tell other people about. It’s awkward and embarrassing, as well as painful and distressing. It can really make your life difficult, as it’s not easy to tell when you will have a flare up, or how badly you will be affected if you do. Many people feel unwilling to leave home because of this, and their lives can become more and more restricted.

Up until recently, Professor Gibson and his team at Monash University had produced the gold standard for treatment of IBS – The low-FODMAP Diet ( a diet that eliminates certain carbohydrates).   And now research has concluded that Hypnosis is just as effective in treating the syndrome.  At Monash University the team found hypnosis had a 72% global symptom improvement rate.   In the UK,  Hypnosis has been proven to be an effective way to treat Irritable Bowel Syndrome and routinely produces positive results in more than 80% of the people under the British NHS 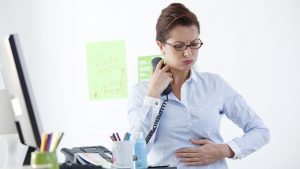 If you’re a sufferer, you may notice that the severity of your symptoms is linked to the levels of stress you are experiencing. Paradoxically, this is good news! It means there are things you can do yourself, aside from any medication, to improve your condition. You might not always be able to change the sources of stress in your life, but you can dramatically change how you respond. And this will change what happens in your gut.

And Maggie?   After a few sessions she’s back playing tennis and no longer scouting out the public toilets whenever she goes out for dinner with her girlfriends.  Her confidence is back and so is her zest for life.

If you’re ready to take that next step to unknot your troubled tummy, your first appointment with an OBLGATION FREE first 20 minutes at one of our Sutherland Shire clinics is only a click away.